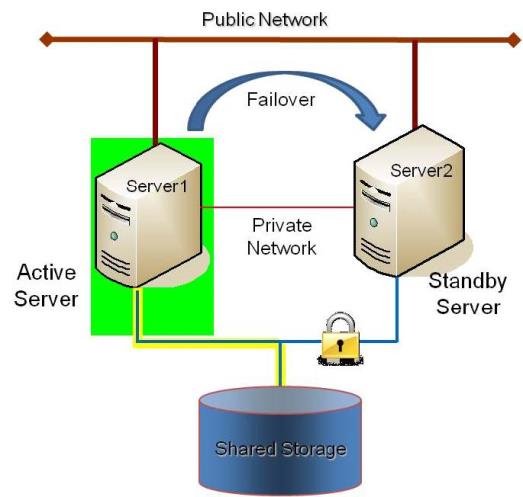 This is a very simple configuration map depicting a pair of LifeKeeper for Windows servers sharing a disk array subsystem. Under normal circumstances, Server 1 runs the application(s) and is considered the primary or active server. Server2 is the secondary or standby server. In this case, there is no contention for disk resources because only one server at a time reserves an entire volume of the disk array.

A pair of servers is the simplest LifeKeeper for Windows configuration. When planning a cluster consisting of more than two servers, a configuration map is even more critical to ensure that the appropriate connections exist between and among servers. Each server must have a physical communication path to every other server in the cluster in order to provide cascading failover capability.

LifeKeeper for Windows comm paths are used to communicate the state of protected resources in a cluster and to manage failovers. Each comm path is assigned a priority number with the lowest number designated as the “highest”priority.

SIOS strongly recommends redundant comm paths whenever possible. If a single comm path is used and that comm path fails, then LifeKeeper for Windows hierarchies may come into service on multiple systems simultaneously. This is known as a false failover or a “split-brain” scenario. In the split-brain scenario, each server believes it is in control of the application and thus can access and write data to the shared storage device.

TCP/IP comm paths are configured in LifeKeeper for Windows using static IP addresses and subnet masks. The cabling may consist of either a crossover cable for a two-node cluster or a small hub for clusters of three or more nodes.