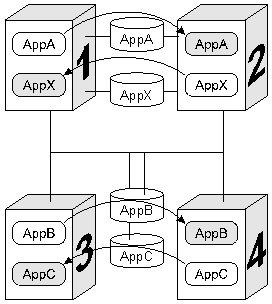 Note: Because LifeKeeper for Windows applies locks at the volume level, only one of the four systems connected to the AppB and AppC disk resources can have access to them at any time. Therefore, when Server 3 is actively processing AppB, those disk resources are no longer available to Servers 1, 2, and 4, even though they have physical connections.