A resource hierarchy is defined on a cluster of LifeKeeper for Windows servers. For a given hierarchy, each server is assigned a priority, with one (1) being the highest possible priority. The primary, or highest priority, server is the computer you want to use for the normal operation of those resources. The server having the second highest priority is the backup server to which you want LifeKeeper for Windows to switch those resources should the primary server fail. 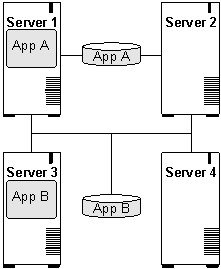