LifeKeeper software RAID hierarchies are created automatically during the hierarchy creation process for resources that sit on top of virtual devices. The creation and extension of hierarchies containing the software RAID resource types will always be driven by the create and extend processes of a higher-level resource type, likewise the delete and unextend. 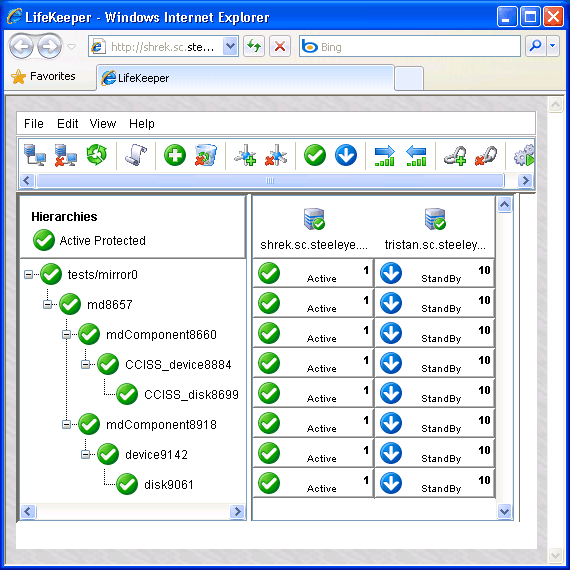 The hierarchy pictured in Figure 4 is a file system hierarchy, created by selecting the File System recovery kit under the Edit > Server > Create Resource Hierarchy menu selection. It consists of a file system resource, tests/mirror0, mounted on a software RAID virtual device, tag md8657. That virtual device is a RAID-1 (mirror) with 2 components: mdComponent8660 and mdComponent8918. The components are configured on partitions on different underlying device types, one being from the CCISS recovery kit (CCISS_device8884) and the other using the default SCSI recovery kit (device9142). The hierarchy also includes the underlying disk devices, CCISS_disk8699 and disk9061, below each of the disk partitions. The hierarchy can also include a “terminal resource” to tie the bottom of each hierarchy to a single resource. For more information on the terminal resource, see Terminal Resource in the Best Practices section. Notice that the mdComponent resource has the same ID as the underlying device. This is unusual in a LifeKeeper hierarchy but is a result of the mdComponent being a resource to allow the Software RAID Recovery Kit to show the state of each component in a virtual device.

Figure 6 above shows a hierarchy using LVM with software RAID.