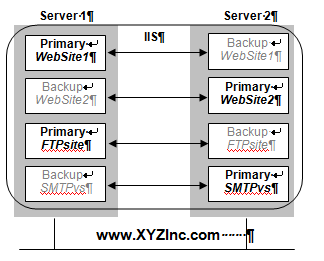 If a primary Web site stops servicing user requests, LifeKeeper activates the backup instance on the backup server to resume service there. Thus, if WebSite1 on Server 1 fails, then LifeKeeper activates the backup instance of WebSite1 on Server 2. After the switchover, there will be two active instances running on Server 2. Once the problem with the failed web server is corrected, you may switch service back to Server 1. The LifeKeeper Microsoft IIS Recovery Kit allows you to manually switch service back or take advantage of the LifeKeeper automatic switchback feature.