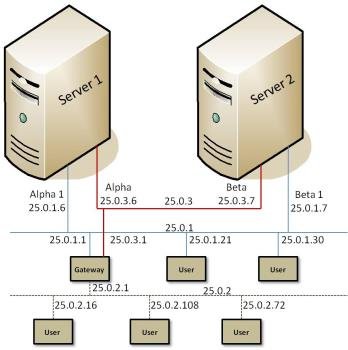 The network configuration has these components:

• High traffic backbone (25.0.1) with both servers and clients

A gateway provides interconnection routing between all LANs. A Domain Name Server (not shown) is used for address resolution.

These are the configuration issues:

Note: The tables associated with each configuration illustration provide examples of the appropriate information that would be entered in the Create Resource Hierarchy wizard for the primary server (Server 1) and Extend Resource Hierarchy wizard for the backup server (Server 2). For additional details on what information should be entered into the wizards, refer to the LifeKeeper Configuration Tasks section later in this section. These tables can be a helpful reference when configuring your recovery kit.

To verify the successful creation of the IP resource, the administrator should perform the following tasks:

Because the selected addresses are on a new (logical) subnet, they can be configured for either eth0 or eth1. However, both must go on the same interface.

For this example, choosing eth0 means that all users would have to go through the gateway. Choosing eth1 would allow the users on the 25.0.1 subnet to access the resources directly (assuming that the new subnet had been added to their internal routing tables). Users on subnet 25.0.2 would still require the gateway. For the purposes of this example, the selected interface is eth1.

Regardless of which physical network is chosen to support the new subnet, the network administrator would have to add routing information to the gateway system before creating the IP resources.

Note The actual IP address associated with the DNS name is displayed in the Extend Wizard as the IP resource.

*Note: Since subnet 25.0.6 is not active on Server 2, both eth0 and eth1 are available choices for the Primary network interface. On Server 1 (the backup server), the only choice is eth1 because the first IP resource, 25.0.6.20, is in service there. When the administrator saves the definition, LifeKeeper brings address 25.0.6.21 in-service on eth1 on Server 2.

The administrator should verify that the new resources are functioning on both servers by performing the following tests: