Quorum checking determines that a node has quorum when it has access to the shared storage device. Witness checking accesses the QWK objects for the other nodes to determine that node’s current state. During a check it is verifying that updates to the QWK objects of the other nodes are still occurring on a regular basis. If no updates have occurred on a particular node after a certain period of time, the node will be considered in a failed state. During this time the checking node will update its own QWK object. Witness checking is performed when quorum checking is performed.

*Note: Using Storage for the Quorum Mode requires a storage device that can be accessed by all nodes in the cluster. The storage solution is to be used for quorum / witness functionality and must not be protected by SPS for Linux. For supported storage solutions see the topic on Available Share Storage.

*Note: In order to use this mode, initialization of the QWK object is required after configuring (See “Storage Mode Configuration”). In addition, reinitialization is necessary to add/delete nodes in the cluster or change the configuration after initial configuration.

The purpose of the quorum/witness function is to avoid a split brain scenario. Therefore, correctly configuring the storage quorum mode choice is critical to ensure all nodes in the cluster can see all the QWK objects. This is accomplished by placing all the QWK objects in the same type of shared storage: block devices, regular files, or S3 objects.

The available shared storage choices are shown below. Specify the type of shared storage being used via the QWK_STORAGE_TYPE setting in the /etc/default/LifeKeeper configuration file.

Quorum witness checking performs a read and/or /write to its own QWK object and will only read the QWK objects of other nodes. Set the access rights appropriately (be careful of permission restrictions such as granting Persistent Reservation to the shared storage).

QUORUM_MODE and WITNESS_MODE should be configured as storage in the /etc/default/LifeKeeper configuration file. The following configuration parameters are also available when using storage:

Note: Based on the added traffic and no traffic time comparisons, you can tune the number of heartbeats and the time mentioned above.
Defaults are 6 (minimum of 5, maximum of 10) seconds for heart beat time and 4 (minimum of 3) missed heart beats.

In the /etc/defaul/LifeKeeper file, SIOS recommends editing the QWK_STORAGE_NUMHBEATS value, changing it to 9.

How to use Storage Mode

Initialization is required in order to use the storage quorum mode. The initialization steps for all the nodes in the cluster are as follows.

*In order to use storage quorum, SIOS recommends that you increase the LCMHEARTBEATS to allow for a longer time before the path is marked as failed. This will change the timeout period from the default of 15 seconds to 45 seconds.

!Verify that all comm paths are up and ALIVE before running qwk_storage_init.

Reinitialization is necessary to add/delete cluster nodes after initial configuration, or when quorum parameters are changed in the /etc/default/LifeKeeperconfiguration file. Please reinitialize according to the following steps.

The frequent logging of message ID 135802 in the lifekeeper.log indicates that the periodic reading and writing of the QWK objects is overloaded and causing a delay in processing. If the number of nodes in the cluster is large and S3 is used for the shared storage (especially when used in two regions), the load from reading and writing of the QWK objects can be high.

Follow these steps to avoid the frequent logging of message ID 135802 in the lifekeeper.log. 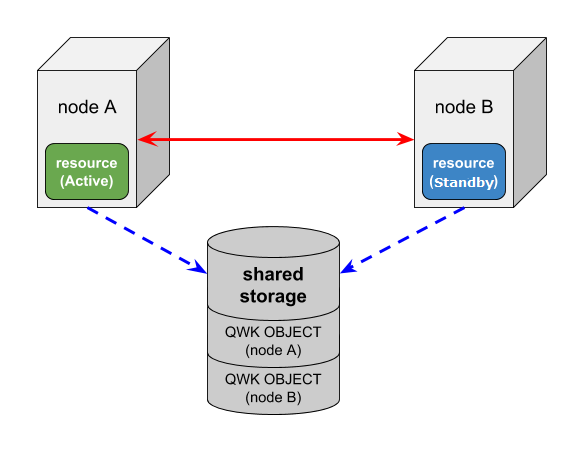 The following three events may change the resource status on a node failure:

In this case, the following will happen:

Node A fails and stops

In this case, Server B will do the following:

With resources being in-service on Node B, Node A is powered on and establishes communications with the other nodes and is able to access the QWK shared storage

In this case, Node A will process a LCM_AVAIL event. Node A will determine that it has quorum and not bring resources in service because they are currently in service on Node B. Next, a COMM_UP event will be processed between Node A and Node B.

Each node will determine that it has quorum during the COMM_UP events and Node A will not bring resources in service because they are currently in service on Node B.

With resources being in-service on Node B, Node A is powered on and cannot establish communications to the other nodes but is able to access the QWK shared storage

In this case, Node A will process a LCM_AVAIL event. Node A will determine that it has quorum since it can access the shared storage for the QWK objects. It will then perform witness checks to determine the status for Node B since the communication to Node B is down. Since Node B is running and has been updating its QWK object, Node A detects this and does not bring resources in service. Node B will do nothing since it can’t communicate with Node A and already has the resource in-service.

In this case, Node A will do the following:

Also, in this case, Node B will do the following:

With resources being in-service on Node B, Node A is powered on and establishes communications with the other nodes and is able to access the QWK shared storage

With the resources being in-service on Node B, Node A powered-on but is not able to access the QWK shared storage

In this case, Node A will process an LCM_AVAIL event. Node A will determine that it does not have quorum and will not bring resources in service.

If the communication paths to Node B are available, then a COMM_UP event will be processed. However, because Node A does not have quorum, it will not bring resources in service.